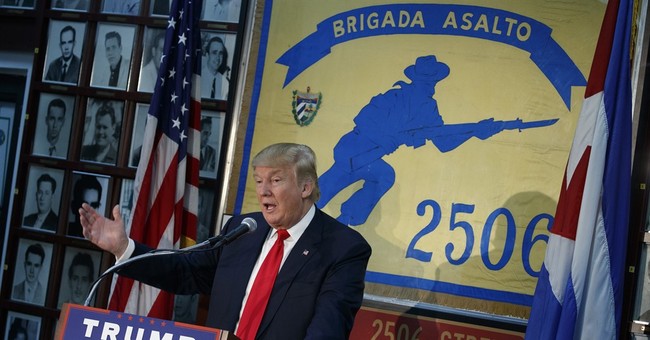 “Democratic presidential nominee Joe Biden likened President Trump to the late Cuban dictator Fidel Castro while speaking with Univision Orlando (Fla.) on Tuesday,” Fox News reported. “‘Trump has more in common with Castro than with Churchill,” Biden said, adding, ‘Look who he admires. He admires Putin, he admires Xi, he admires everyone who behaves in an authoritarian way. I am the exact opposite. I have faith in the democratic system.‘”

What could possibly provoke such a hilariously asinine comment—made even more hilarious considering it was made in a venue geared toward the Americans most personally familiar with the totalitarian rule of Fidel Castro? Well:

“Democratic presidential nominee Joe Biden has seemingly lost his advantage over President Trump in the crucial swing state of Florida, an NBC News/Marist poll released Tuesday found. A lot of that shift seemingly stems from Florida’s Latino voters, who have gone from resoundingly supporting Hillary Clinton in 2016 to actually tipping in Trump’s favor this time around, the poll showed.”

Keep in mind, amigos, that when the polls and the media mention Florida “Latinos,” they’re no longer referring to traditionally and overwhelmingly Republican Cuban-Americans, who now comprise only about 20 percent of Florida’s “Latinos,” (if we must succumb to using that idiotic leftist nomenclature for a vastly diverse group of Americans, ethnicity-wise.)CARTOONS | AF BRANCOVIEW CARTOON

For some crazy reason Trump has the fervent support of the great majority of living Americans who have personally experienced this hemisphere’s totalitarian regimes. In 2016 Trump got almost 60 percent of the Cuban-American vote, the highest percentage from any “ethnic” group in the U.S., including “southern whites.” He’ll probably get an even higher percentage this time. Most Cuban-Americans consider Trump America’s best defense AGAINST the totalitarianism they saw from close-up with their own eyes in Cuba.

But the Democrat/Media desperation gets even more comical. Now let’s turn to the Democrat Party’s propaganda subsidiary CNN, and their response to a Trump tweet this week. Here’s the tweet:

“Sleepy Joe Biden has spent 47 years in politics being terrible to Hispanics. Now he is relying on Castro lover Bernie Sanders to help him out. That won’t work! Remember, Miami Cubans gave me the highly honored Bay of Pigs Award for all I have done for our great Cuban population!”

President Trump was obviously referring to the fact that the Miami-based Bay of Pigs Veterans Association invited him to their headquarters, awarded him with a special plaque, pinned him with a Bay of Pigs pin, and officially endorsed him for president when he was running in 2016—the first time in the history of this glorious association that they have officially endorsed a U.S. presidential candidate. Later, President Trump invited officers of the Bay of Pigs Veterans Association (including Che Guevara captor Felix Rodriguez) to the White House where these men presented President Trump with their revered battle flag. https://ca3e94b3d67bc7af61133565bad2ec07.safeframe.googlesyndication.com/safeframe/1-0-37/html/container.html

HAH! Not according to a CNN “fact-checker” who claims such an award is “non-existent,” that nothing by the precise name of a “Bay of Pigs Award” exists! So according to CNN, Trump was again lying!

In short order, an outraged Bay of Pigs Veterans Association themselves issued a press release to denounce the desperate and idiotic CNN claim:

“It was with great satisfaction that we read President Donald J. Trump’s Twitter mentioning the event in which the Veterans Association-Brigade 2506 presented a recognition award, consisting of the emblem used by our patriots during the battle of the Bay of Pigs Invasion, Cuba, 1961. The award was presented to President Trump for the purpose of recognizing his political and social platform, which is in line with the conservative beliefs of our organization and his objectives of ending totalitarian regimes, drug and human trafficking and human rights abuses in our hemisphere and beyond.”https://ca3e94b3d67bc7af61133565bad2ec07.safeframe.googlesyndication.com/safeframe/1-0-37/html/container.html

These men (many as boys) wrote as glorious a chapter in military history and the annals of freedom as any you’d care to read. Perhaps a reminder (or informer) is in order:

The goals of these mostly civilian volunteers were crystal-clear: firing-squads silenced, families reunited, tens of thousands freed from prisons, torture chambers, and concentration camps. We see it on the History Channel after our GI’s took places like Manila and Munich. In 1961 newsreels could have captured such scenes without crossing oceans. When those Cuban freedom-fighters hit the beach at the Bay of Pigs, one of every 18 Cubans suffered in Castro’s Gulag. Mass graves dotted the Cuban countryside, piled with hundreds who’d crumpled in front of Castro and Che Guevara’s firing squads. Most of the invaders had loved-ones among the above. Modern history records few soldiers with the burning morale of the Bay of Pigs freedom-fighters.

When the smoke cleared and their ammo had been expended to the very last bullet, when a hundred of them lay dead and hundreds more wounded, after three days of relentless battle, barely 1,400 of them — without air support (from the U.S. Carriers just offshore) and without a single supporting shot by naval artillery (from U.S. cruisers and destroyers poised just offshore) — had squared off against 21,000 Castro troops, his entire air force and squadrons of Soviet tanks. The Cuban freedom-fighters (again, mostly civilian volunteers) inflicted over 3000 casualties on their Soviet-trained, armed, and led enemies. This feat of arms still amazes professional military men.

“They fought magnificently and were not defeated,” stressed Marine Col. Jack Hawkins, a multi-decorated WWII and Korea vet who helped train them. “They were abandoned on the beach without the supplies and support promised by their sponsor, the Government of the United States.”

Think about it: why would such men twice endorse Donald Trump for U.S. president?