Chinese Professor Reveals Plot in Shock Video: US Elites and China Have Teamed Up to Take Control Of America 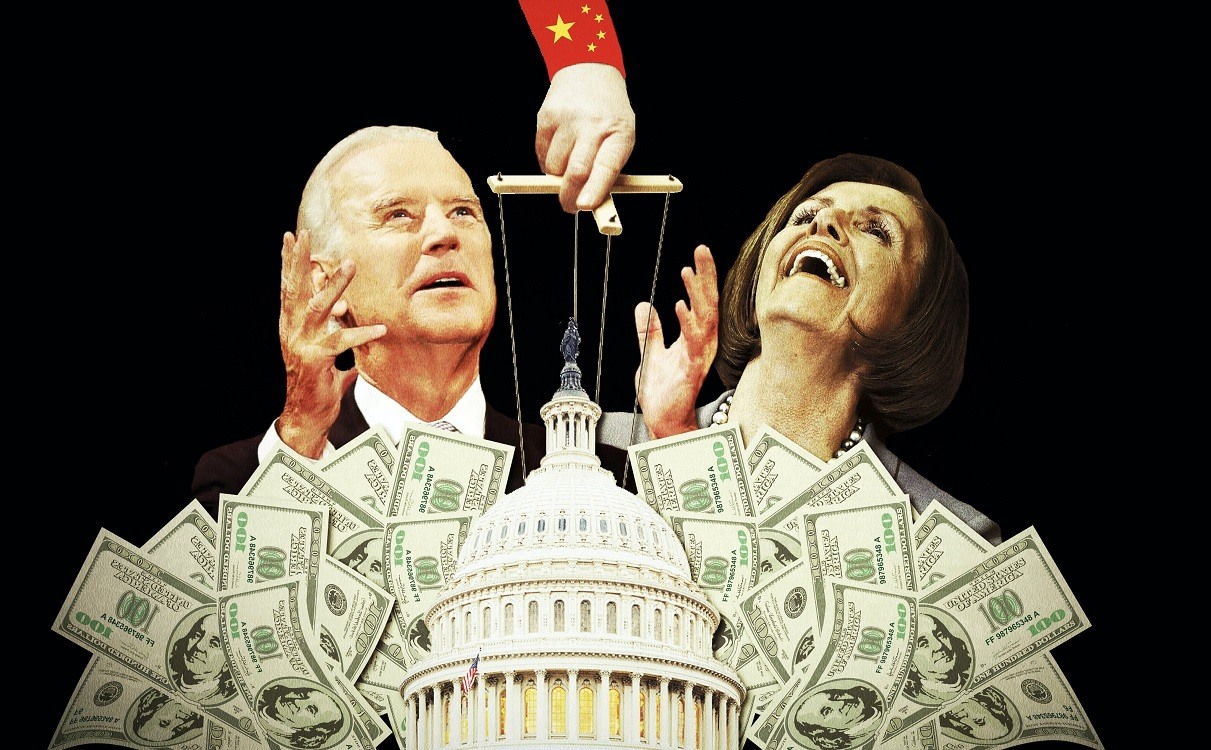 In the United States, the press, big tech, and Washington all collaborate to conceal how beholden all of them are to a rising Chinese superpower. But in China, very different norms prevail.

A remarkable speech by Chinese professor Di Dongsheng, delivered at a November 28 conference in Shanghai, reveals that in China, elites can talk openly about how they have brought foreigners under their sway.

Di is vice dean at Renmin University’s School of International Relations. He is also vice director and secretary of the Center for Foreign Strategic Studies in China, a think tank at Renmin. His ties with the Chinese establishment run deep. One well-placed Chinese source told Revolver that Di serves as an informal advisor at the highest levels of Chinese government, with a direct line to President Xi.

When standing before a friendly crowd of Chinese people, Di has few reservations in describing how U.S.-China relations work.

“Why did China and the U.S. use to be able to settle all kinds of issues between 1992 and 2016? No matter what kind of crises we encountered, be it the Yinhe incident, the bombing of the embassy, or the crashing of the plane, things were all solved in no time, like [a couple] do with their quarrels starting at the bed head but ending at the bed end. We fixed everything in two months. What is the reason? I’m going to throw out something maybe a little bit explosive here. It’s just because we have people at the top. We have our old friends who are at the top of America’s core inner circle of power & influence.”

Di then relates a brief anecdote to illustrate his point. Prior to a visit by Xi Jinping to the United States, Di scheduled an event at the distinguished D.C. bookstore Politics and Prose, focused on the English translation of Xi’s book The Governance of China. According to Di, the event initially fell through, because the bookstore’s owner was a former journalist who disliked the Chinese government. But that was no problem: An unnamed Western woman with long ties to China intervened with the owner and, according to Di, “made him an offer he couldn’t refuse.”

The Politics and Prose event in question appears to be confirmed by journalist Jennifer Zhang in the following series of photos and tweets.

Di elaborates on the mysterious old woman who pulled strings to make the event happen: “Of course, the old lady was not in the Mafia, but who was she?” Di goes on. “As we just said, Wall Street. She is from a famous, leading global financial institution on Wall Street.  She is the president of the Asia region of a top-level financial institution. Of course, it would be politically incorrect for me to go on.”

But go on Di does, laying out the exact manner that China so routinely smooths over differences with the West.

“In plain and simple language, during the last three to four decades we took advantage of America’s core circle,” he says. “Wall Street has had a very profound influence over America’s domestic and foreign affairs since the 1970s.”

The Trump administration was a brief hiccup in this system, Di said, because President Trump was not under the control of Wall Street or the Wall Street-aligned D.C. establishment. But with the election of Joe Biden, he said, business as usual could soon resume:

“In the U.S.-China trade war they tried to help [us.] My friends in the U.S. told me that: They tried to help, but they couldn’t. Now, with Biden winning the election, the traditional elites, political elites, the establishment, they have a very close relationship with Wall Street.”

Di then drops the biggest bombshell of all by bringing up Hunter Biden.  In America, Hunter’s ties to China and other foreign governments were actively suppressed by the press, which lied and dubbed it “misinformation.” But for Di, the links between Hunter and China were obvious, and something to joke about.

“Trump has been saying that Biden’s son has some sort of global foundation,” Di says. “Who helped him build the foundation? Got it?”

The crowd did get it, as chuckles rippled through the audience. In fact, watching the whole video makes it clear the audience found Di’s entire speech hilarious. To wealthy and connected Chinese, that’s America: A joke country whose elites are bought off by the rising Chinese superpower. Tucker Carlson covered the story with characteristic thoroughness and insight.

Tucker is correct here to emphasize the role of the American ruling class, particularly that of Wall Street, in facilitating China’s rise and ability to exploit America. Indeed, it would be easy to watch the video of the Chinese Professor and fume at the Chinese Communist Party for their nefarious influence operations in the United States. But that would be taking away the wrong point, or at least an incomplete one. The real scandal isn’t how wicked the Chinese are. They are just doing what the elites of any country should do — look out for the interests of their country and its people. America is rich and technologically advanced, but its ruling class is corrupt, degenerate, incompetent, dysfunctional, and all-too-eager to sell out yet another morsel of America for short-term financial gain.

From very early on in his presidential campaign, President Trump would always frame the Chinese threat in these terms. That is, he doesn’t blame China for doing what is best for the Chinese — he blames the stupid, weak, and corrupt leaders of the U.S. for letting them do it.

The problem with China, then, isn’t really a problem with China at all. It’s a problem with our own unworthy and illegitimate ruling class. It is not as though the American ruling class is patriotic, competent, and intelligent when it comes to most issues, but has some unique blindspot or weakness when it comes to China. If this were the case, it would make sense to emphasize the particular dangers of China in order to direct the hypothetically patriotic, intelligent, and functional energies of the American ruling class to this problem.

But this is not the case — that is, the American ruling class is not patriotic, competent and intelligent on most issues. Quite the contrary, on just about every issue that has mattered over the past several decades, the American ruling class has been stupid, corrupt, dysfunctional, and parasitic. If China disappeared, they would simply be selling the country out to India, or Saudi Arabia, or Vietnam, or some other rising country (and in fact, they are doing this already, just to a lesser extent). Our ruling class has failed us on China because they have failed us on everything. It follows that there will be no sound China policy that benefits actual Americans until there is a legitimate ruling class in the United States. For this reason, emphasizing the wickedness and danger of China will be less effective than emphasizing the utter failure and illegitimacy of the American ruling class.

The coronavirus is a perfect example. Perhaps China is at fault in many ways for the virus. But even assuming the virus was concocted in a Chinese lab at the direction of President Xi himself, we must remember that the Chinese didn’t force our media to lie about it and exaggerate its danger, nor did they force our American tech companies to censor all information and analysis of Covid not approved by our ruling class. The Chinese did not force the devastating and unnecessary lockdowns that have destroyed family wealth, shattered lives and dreams, and ruined New York, once one of the greatest cities in the world. Our own leaders did that to aggrandize and empower themselves, and no matter how defiantly we use the term “China virus” we should never forget that. Perhaps we would be better served to call it the “Bezos virus.”

Unfortunately, many of Trump’s would be imitators (such as Sec Pompeo) have not followed the President’s wise approach in framing the China problem principally in terms of the failure of our own ruling class. Instead, you hear morality tales about oppression of Uighurs, complaints that Chinese are “racists” that exploit third-world nations, and re-hashed Cold War rhetoric about the rise of an evil and dangerous opponent. Of course, many of these things are true, though the rhetoric is ultimately weak and performative. How many of these politicians would be serious enough to suggest the death penalty for any government official caught taking bribes from or doing the bidding of a foreign government? Even rhetorically, when conservatives point fingers at China in ways that reinforce left-wing narratives, this neither strengthens their political position nor the position of the United States relative to China in the long run in any serious way. Any framing of the China problem that does not look at the issue through the prism of an utterly degenerate, illegitimate, corrupt and dysfunctional American ruling-class is bound to fail.

Even if conservatives were to succeed in turning the US against China, how much of a victory would it really be to “triumph” only to have our own nation celebrate the chemical castration of children and shame men for being men and women for being women? What kind of victory is it if we train our children to hate their ancestors and the heroes who built this nation, and if we close churches but encourage savages to twerk on the embers of burned American flags? What kind of victory would allow our oligarchs, after hollowing out the American middle class, to perform a coup de grâce by indefinitely shutting down what is left of independent business, supposedly because of a virus whose average victim dies at an age older than the average life expectancy?

While China certainly played some role, we ultimately have our own ruling class to blame for the situation described above. The villain in the video featured at the beginning of this article is therefore not the Chinese professor, nor his bosses in Beijing. The villain is the Wall Street woman who did his bidding.

And so, while the video above is a reminder of the sinister intentions of our Chinese rivals, it is ultimately a reminder that our true enemies are no foreign adversary — the true enemies of the American people are the people who control America.