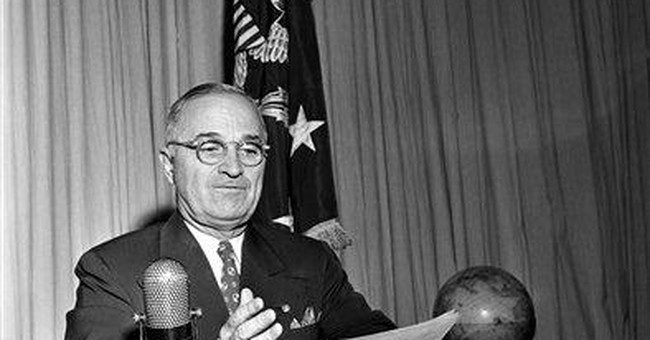 This year marks the 75th anniversary of the end of World War II, with the signing of the historic surrender by Japan on August 15, 1945. Surrender came abruptly after the atomic (nuclear) bombs fell on two principal Japanese cities of Hiroshima (August 6) and Nagasaki (August 9).

Did President Truman have a viable alternative to dropping the atomic bombs on Japan as some critics have suggested? No issue has fueled more anti-American sentiment than the revisionist idea that the United States, by dropping the bombs, shared primary guilt for the war. What were Truman’s reasons for ending the war against Japan in this manner?

By mid-1945, Truman realized that pursuing the war to a gruesome close by conventional means would likely cost the lives of an additional half a million or more American soldiers.  Our casualties on Iwo Jima and Okinawa left no doubt that the 2.5 million Japanese soldiers on the mainland islands were prepared to fight to the death.

Truman also worried about some 100,000+ American prisoners of war held in camps throughout the Japanese empire. Contrary to the Geneva Code, POWs had been “employed” as forced labor since early 1942. Many others had witnessed scores of atrocities during the Bataan death march, the construction of the Burma-Siam railway, and while confined in the wretched holds of the infamous hell-ships transporting them to factories in Japan.

The dire circumstances of the POWs were indeed harsher than that of the Nisei detainees in the United States. Death rates of American POWs in Japanese camps swelled to over 30 percent. Ominously, American intelligence had intercepted a general order issued by Imperial high command to “dispose” of all POWs and civilian detainees “without a trace” when the Allied invasion of the homeland began.

Why then didn’t the Japanese slaughter the POWs outright after the Hiroshima bombing? Three days of eerie silence fell across the diplomatic scene before the second bomb exploded over Nagasaki. What had changed the mind of Emperor Hirohito?

According to noted writer and Dutch Army Colonel Laurens van der Post in his book Night of the New Moon, the exploding bombs — described in Japanese accounts as “pieces of the sun hurled at Japan”—were a stark revelation that the time for peace had arrived.

Van der Post had been confined in a remote POW camp in mountainous Java since the fall of the Dutch army in 1941. He and a few select fellow prisoners plotted a breakout for the day that the signs of the anticipated executions became unmistakable. His subordinate, while monitoring late-night broadcasts on a clandestine radio set, heard through monsoon static about a calamity that had happened earlier that day in Hiroshima, Japan. He couldn’t be sure just what happened but knew from the excited voice that it was big.

Van der Post’s band of conspirators waited for what the Japanese would do next. A week slowly passed. Then the commandant summoned him to headquarters and in a brief ceremony surrendered the camp to him.

Truman had been right. Low-flying B-29s began appearing over camps in Manchuria, Korea and Formosa (Taiwan), parachuting supplies to starving POWs. Those same planes of the 20th Air Force only weeks earlier had concluded the most devastating bombing campaign in history, even before the first bomb fell over Hiroshima.

In the days leading up to Japan’s acceptance of surrender on Aug. 15, negotiators agreed that the Japanese would keep their emperor, but it was to be otherwise unconditional. The bombs were the emperor’s, and his nation’s, ultimate salvation. The toll of civilians and POWs in the two ill-fated cities became the sacrifice for far larger numbers of lives spared when the invasion of Japan was canceled and for the hundreds of thousands of Allied POWs in the hands of camp commanders with execution orders on their desks.

On Aug. 6, my uncle was returning from Europe aboard a troop transport heading through the Straits of Gibraltar, part of a convoy bound for the Far East. Three days out, the ship’s bow swung northwestward — to the great relief of thousands of GIs. Instead of facing the inevitable beach-head invasion, he and his buddies were headed for New York City and then back home.

A million Americans and Japanese owed their lives then — as some of you reading this now owe yours — to Harry S. Truman, who knew where the buck stopped when there were no revisionists.

William D. Balgord is a consultant and writer who heads Environmental & Resources Technology in Middleton, Wis.